I’m not really into cereal but randomly found myself at The Killer Cereal Cafe with some friends on its opening night. My feelings towards cereal are not helped by the fact that I am reluctantly lactose intolerant. For as long as I can remember, I have defiantly tried to drink milk with whatever I want, like a nice, normal human being,but after 26 years of adverse effects I have finally admitted defeat. I can’t drink milk.

Thankfully the Cafe stocks all kinds of milk including oat milk and my experimental choice- lacto free.Behind the counter all of the beloved boxes of cereal were displayed. Given that the cafe is entirely dedicated to cereal, the boxes could have been put in a more prominent place. They all looked rather inedible and diabetes inducing to me so I went for Apple Cinnamon Cheerios; different but not entirely made out of sugar and e numbers.

The seating area downstairs was a shrine to the 90s; Hey Arnold was on a boxy tv. The Power Puff Girls theme song was on full blast. Tacky toys which you could get out of a cereal box like a  Simpsons watch were displayed. It was interesting but not enough to hold my attention for long.I ate the cereal with the milk discovering that lacto free milk is actually lacto free. But despite this revelation and  gushes from the hipster girl on the table next to us that the cereal was ‘awesome’, I just felt like I just ate cereal in a slightly interesting room.The Killer Cereal Cafe interested me for about two whole minutes but in the grand scheme of things, it was just cereal. 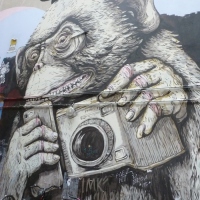